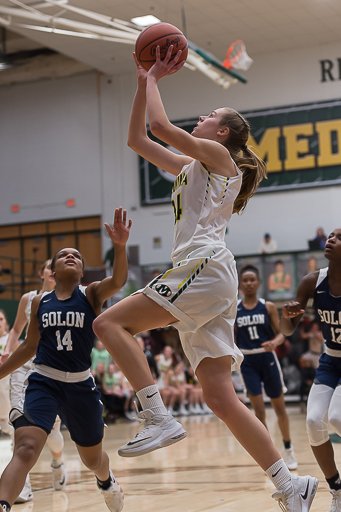 Solon claimed the GCC Championship with a 63-54 victory at Medina on Saturday afternoon. Though the Bees were up by two at the half, the Comets used a decisive 23-5 third quarter to claim the win and push the Bees into second place. It marked the best quarter of the season for the Comets and the worst for the Bees, with just two baskets and seven turnovers. The team is now 18-2 with two regular season games remaining at home.

Sarah McKee led the Bees’ comeback attempt in the 4th Q and led all scorers with 16 points (10 in the final stanza) and added 2 blocks. Abby McMullen tied her career-high with 11 points while Madison Luthy added 10. Lindsey Linard contributed 8 points and Katie Neate chipped in 7 for the Bees.