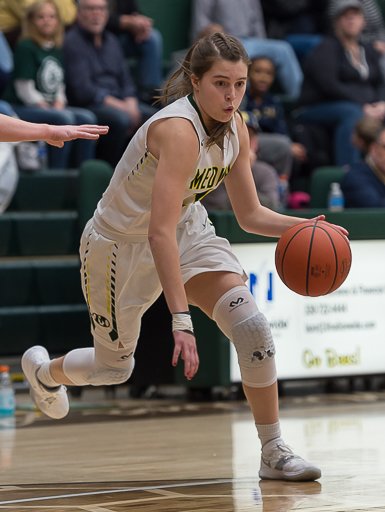 Medina reached 20 wins in the regular season after defeating the Wooster Generals 67-45 on Wednesday night. The Bees wrapped up their regular season and the team became just the fourth ever on the girls side to reach 20 wins in school history.

Medina jumped out to a 23-9 first quarter lead and never looked back. The team was led by sophomores Elizabeth Stuart (20 points, 7 rebounds) and Sarah McKee (12 points, 5 rebounds, 1 block, 1 steal, 1 assist). Connecting on four from downtown tonight, Stuart now ranks third among all-time single-season three-point scorers with 40 3FGM. Rochele Meyer and Erin Pacholski are tied at 45 for most three’s made in a singe season.

The Bees, seeded #1, will have a first-round bye before hosting a tournament game on Thursday, Feb. 21 at 7pm.

Thanks to all players, coaches, staff, parents & fans for a great effort and such wonderful support throughout the regular season! Go Bees!

No Events This Week

Events are added by athletic staff.
View All Events